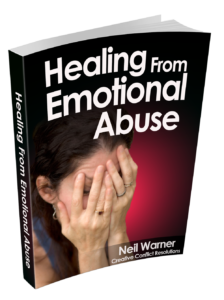 Men and women deal with a lot of abuse in the family. But unlike any form of domestic violence, emotional abuse is the strongest yet the most subtle of all. It is too subtle that sometimes even the abused partner does not notice it. This kind of abuse leaves no identifying physical evidence, yet leaves a lasting mark to the abused person’s self esteem.

Emotional abuse may be described as subjecting a partner consistently to insult, embarrassment, scorn, shame or hurt.

Emotional abuse may manifest itself in many different forms: from something as simple as mocking a partner for their beliefs or faith, or telling them nobody wants or likes them; to something as demeaning as telling a partner that he’s worthless; to

the extent of threatening to hurt a partner or their family. People subjected to emotional abuse are constantly accused and criticized, and often faulted for every little thing they do.

Domineering partners use emotional abuse to control, degrade, humiliate, or punish a partner to submission. This is comparable to how prison guards manipulate prisoners of war being cooperative. They use isolation to cut off any form of external support from friends and family, making victims dependent to the abusers. Abusers also use threats and intimidation to force a partner to submission. Abusive partners use negative criticism to demean a partner about his appearance, actions and abilities.

Because partners are constantly exposed to ideas of being worthless, they start believing the lies over time and tend to develop low self-esteem and eventually develop the symptoms mentioned above.

Phase 1, tension building. This is when the tension begins,communication starts falling apart, and the victim feels an intense need to please or placate an abuser.

Phase 2, incident. This is when the actual verbal and emotional abuse happens. The abuser starts getting angry, blaming and arguing with the victim. The abuser threatens and intimidates the victim.

Phase 3, reconciliation. This is when the abuser apologizes for what he’s said and done. He passes the blame onto the victim, denying any abuse he’s done, or says that what he did wasn’t that bad as the victim thinks it is.

Phase 4, calm. This is when the incident is forgotten. The relationship is at peace, and no abuse is being done to the victim.

In a relationship, both partners should learn to say when enough is enough. An abusive environment is never good for

both parties, especially for the children. Children who grew up in an abusive domestic environment tend to carry this behaviour when he has his own family. As parents, it is necessary to work on resolving emotional abuse issues as early as possible before it destroys the entire family. Of course it is natural for an emotionally abusive partner to decline to undergo counseling, denying the fact the he is subjecting his partner to such abuse. However, for the good of everybody in the family, certain steps must be taken to stop the abuse.

Love is supposed to help us grow, not trap us like a prisoner. If you feel like you’re being boxed in by an abusive partner, speak up. It is never ok to let yourself be subjected to so much abuse. It is not advisable to immediately jump into a divorce, try to work it out first. With the right help, you might still be able to rebuild a happy married life.